Growing most things involves nothing more than planting a few seeds and getting on with it.

But when you have to grow something from spores, there’s a notion that things are much more difficult.

Growing kyoto moss from spores does require some special attention but if you follow some simple steps, you shouldn’t have too many problems.

If you’re keen to grow this moss for your bonsais then you’re in the right place. We’ve put together this guide to help you on the road to success.

What Is Kyoto Moss?

Kyoto moss is a type of bryum moss and it gets its name because it is found growing all over the Kyoto gardens in Japan.

However, there are several different types of bryum moss found growing all over the world and many bonsai enthusiasts would tell you that you’d do just as well to use a local species. 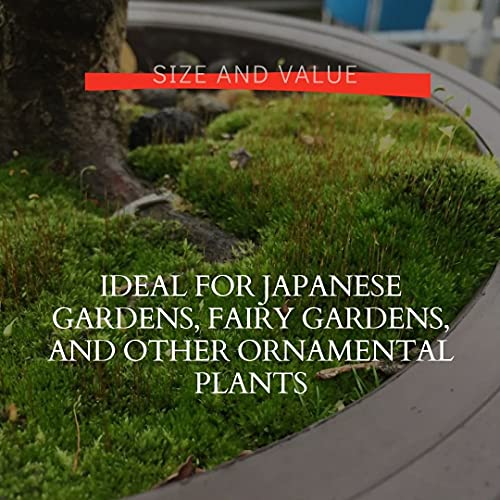 However, since the art of bonsai comes from Japan, a lot of people want to use something that mimics this culture perfectly.

For Reference – Bryum moss is actually the largest genus of moss with more than 1000 species. However, the genus was split back in 2005 into three separate groups. In any case, all species, including kyoto moss, have shorter, thicker and more rounded stems than other moss species.

While kyoto moss can be used for various things, one of the most common uses is to adorn the soil of a bonsai tree container.

Why Use Kyoto Moss For Bonsai Trees?

Moss isn’t always seen as a positive growth for plants but that’s really dependent on what you’re growing.

When it comes to the bonsai tree, you’ll find that kyoto moss is incredibly beneficial to the plant and there are several reasons for this.

For starters, the mere presence of kyoto moss will make a much more realistic looking planting for your bonsai.

One of the things that a lot of bonsai artists try to do is to make it look as though the tree is full sized. Kyoto moss can help you do this. Even for people who prefer a rockier setting for their tree, kyoto moss allows you to add texture and depth.

It is worth pointing out, however, that growers should be mindful not to allow the moss to grow up the trunk of the bonsai tree.

Another great reason to use kyoto moss on your bonsai is because it will help the soil to retain moisture much more easily.

You’ll have the peace of mind of knowing that your tree won’t suffer from dehydration.

What’s More – You’ll be able to reduce the number of times you have to water your tree which means less work for you.

That said, you should remember that the trick to successfully growing a bonsai is plenty of moisture so don’t fall into the trap of thinking that having kyoto moss will mean you can stop watering altogether.

This will be detrimental to your plant!

Finally, the layer of kyoto moss will provide better insulation for your bonsai. 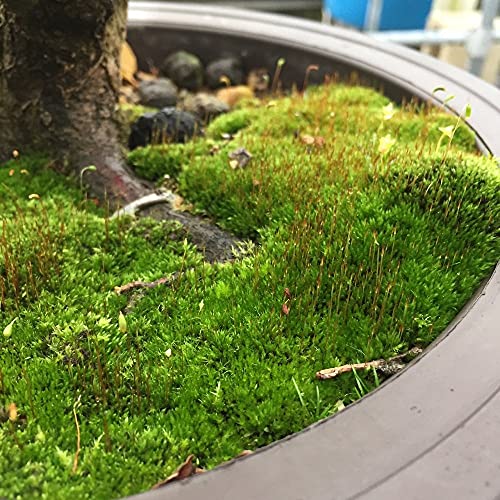 During the winter, it will help to retain heat while in the summer months, it’ll keep the soil cooler. This will ensure good rooth health as they’ll be better protected.

How To Grow Kyoto Moss From Spores

If you want to grow kyoto moss from spores then you can buy packets online and in stores.

The great thing about these packets is that they often come zip-locked so they have a pretty much indefinite shelf life.

If you’re not going to use all the spores at once or want to wait to grow them, you’ll be in no hurry to use them up.

The spores aren’t typically difficult to grow but there are some things you can do to ensure the best success.

Here are our top tips!

Don’t go over the top with your moss spores.

You’ll find that the packets usually tell you how many square feet the spores will cover.

If you’re only adding them to a small container then you won’t need a packet that covers three square feet.

Keep In Mind – If you do add the whole thing then the spores will have to compete for nutrients and you’ll have less success. In some cases, they just won’t grow at all.

Other Materials To Use

While a lot of people will grow their kyoto moss spores directly in the soil of the bonsai container, this isn’t the only option.

It is possible to grow it separately and then add the moss to the bonsai planter at a later date.

To do this, you’ll need materials that the kyoto moss spores can grow on.

Make sure the soil is nice and moist before you add the spores.

You should water the soil and allow it to fully absorb; only then can you pop the spores in.

Moist soil will ensure better growth but it will also make sure that the spores aren’t washed or blown away in the early stages.

Do You Need To Fertilize Kyoto Moss?

It is perfectly possible to grow your kyoto moss spores without adding anything else.

However, one of the most successful methods proven to give the moss a boost is to use rice water.

This simply means cooking some rice and rinsing it. You then use the water that rinsed the rice in a spray bottle and cover the moss spores in this.

If you haven’t used all of the spores from the packet, you might consider putting some into the rice water which can further boost fertilization.

One of the most important things that moss needs to grow is light, especially in the early stages. 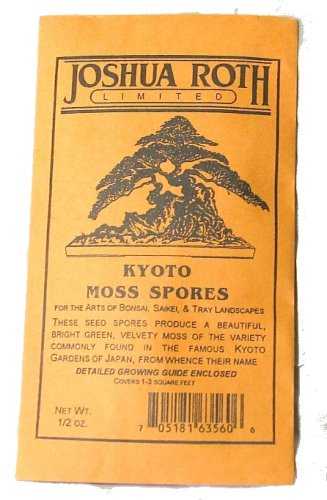 A lot of people keep their bonsai indoors and while this is OK, you’ll need to relocate it for at least a few days to give the spores the correct amount of sunlight.

That said, you don’t want to place the container in direct sunlight because this will cause the soil to dry out much more quickly.

Do remember to keep checking the soil to make sure that it stays moist as even indirect sunlight will draw out moisture so you’ll need to keep it topped up.

Growing kyoto moss spores can be relatively easy when you take the right approach.

Once your moss has grown, it is hugely beneficial for your bonsais as it will help to retain moisture, insulate the tree and give it an authentic appearance.

Following the steps in this guide, you will find that you have a good layer of moss in around four weeks.