Pond Turn Over (All You Need To Know)

Sometimes, in the spring and fall, a pond can have an unpleasant smell (Sulphur like).

The water can also get murky as toxic decaying matter usually at the bottom of the pond rises to the top.

Fish die or are seen gasping for air at the surface.

When this happens, what it means is that the pond has turned over.

Pond turnover is a natural process in which stagnant water in the pond mixes due to temperature changes in surface waters as the seasons progress.

Most ponds resurface in the fall and spring:

What Is Pond Turn Over, And How Does It Happen?

Pond turnover is a natural process that frequently happens in small bodies of fresh stagnant water like backyard ponds and lakes. It usually involves the pond’s water suddenly becoming very murky and all the fish within it dying.

This biological mass can come from several sources, including vegetation either in a pond or from shore; it can include fish or bird feces and droppings from cattle and wild animals and fish food.

These materials settle to the bottom and form a layer of decaying matter which produces and traps noxious gases.

During the summer, the sun heats the surface water while the cool and dense water sits at the pond’s bottom. Essentially, the water becomes divided into different layers due to the differences in water temperature.

Furthermore, the difference in density also does not allow the two layers to mix.

As the surface water begins to cool in the fall, it eventually equalizes the temperatures between the two layers.

This causes the whole layer of decaying matter to lift from the bottom and float to the surface, making the entire water column mix or “turnover.”

At this point and time, the pond cannot oxygenate, and the life below cannot survive.

As a Result: Fish or any animals typically die of a combination of oxygen deficiency and toxicity.

The stages are usually in line with the four seasons of the year.

Summer stratification is the formation of three distinct layers of water-based on temperature, dissolved oxygen, and density.

These layers do not mix easily due to their disparate physical properties:

Here decomposition of organic matter happens, thus using up all the dissolved oxygen.

This layer could be completely devoid of oxygen by mid-July, and no plant or animal can survive here.

When temperatures fall below 50 degrees Fahrenheit in the fall, the epilimnion layer cools and becomes heavier and denser, thus sinking in. The autumn wind then stirs the epilimnion layer, thus mixing with the thermocline layer to the way up to the hypolimnion layer. This action causes complete mixing of the water columns, known as fall turnover.

Over time, the pond’s freely circulating water becomes thoroughly oxygenated from the surface to the deepest part of the pond.

Because of this change, all decaying particles and gasses gathered in the hypolimnion layer over the summer float on the water’s surface.

As the winter season approaches, the pond’s water reaches a maximum density of 39 degrees Fahrenheit.

On top of the deeper water, a layer of colder, less dense water quickly forms.

This colder water eventually reaches 32 degrees Fahrenheit, and a layer of ice forms on the pond’s surface.

This causes the water to break up into layers once more until the water near the bottom becomes oxygen-depleted, as it does in the summer.

This process is also referred to as inverse stratification.

Another change occurs in the spring.

As the water in the pond warms up and reaches its most uniform temperature and density of the year, the water column becomes well mixed, providing healthy oxygen levels for aquatic life throughout.

Location of the Pond

Ponds in open, windy areas may turn over at any time of year, only to stratify when the wind dies down.

Ponds in deep, narrow valleys, or those protected by forest land, on the other hand, may stratify and remain relatively stable throughout the summer.

Depth of the Pond

Another element determining pond turnover occurs the ratio between the water layer’s depth, which can be mixed by wind action, and the water depth at the bottom.

The depth determines if the water in your pond can form different layers of water (stratification).

Shallow ponds often don’t stratify as no fixed depth can separate the water.

Furthermore, shallow ponds are warmed or cooled to uniform temperatures, and high winds quickly and regularly mix the water throughout the year, reducing turnover chances.

On the Other Hand: Deep ponds from six feet and above tend to establish pronounced and stable layers of water—these layers over time result in the pond turning over.

Deep ponds stratify into different layers in the summer due to temperature differences.

Because it does not receive direct sunlight, the heated water at the top becomes less dense than the cooler water beneath it.

Due to the density difference, these two layers cannot mix; thus, there is no water movement. Therefore, a thick layer of decaying matter can form at the bottom.

This causes the entire water column to rotate, stirring the bottom sediments throughout the pond.

As a Result: Large amounts of sulfur and methane gas are released into the atmosphere, emitting extreme, septic odors.

Smaller ponds have less turnover in the fall and spring than larger ponds.

How to Prevent a Pond from Turning Over

Since pond turnover is a natural process, it can be tough to reverse it once it’s begun.

However, there are some things one can do to prevent killing the fish and prevent it from happening in the future.

The only way to avoid turnover is to eliminate stratification and keep the pond thoroughly mixed throughout the year.

This is made possible by installing a bottom diffused aeration system. 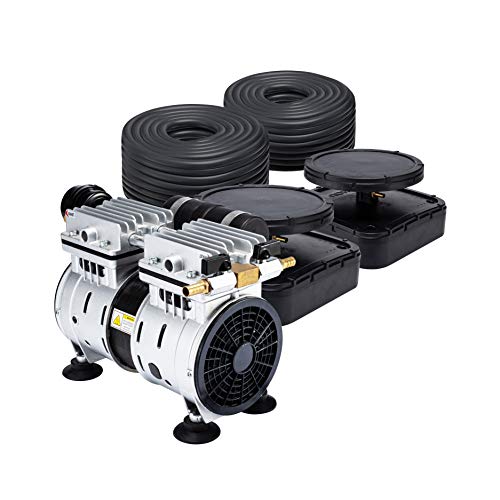 Diffuser aeration systems have been shown to significantly reduce the likelihood of pond turning over.

Diffuser systems are powered by a small air compressor mounted near the pond’s edge.

These may be 110v or 230v, depending on the size of the system required to service the pond.

A windmill may power them in some cases.

A pump at the shore directs air continuously through a weighted tube to an air diffuser at the pond’s bottom, producing a stream of tiny air bubbles that rise to the surface, carrying vast amounts of water and oxygen.

The rising bubbles that have the water help to eliminate stratification.

As a result, what were once two distinct layers of water are now one oxygenated mixture.

The increased oxygen levels will aid in the prevention of a massive fish die-off and will act as a buffer against significant problems associated with turnover.

Keep In Mind: These work best in deep or large ponds where good circulation can be set up. In shallower ponds, they do not operate as efficiently.

This type of equipment creates directional flow while still providing oxygen where diffuse aeration is insufficient. 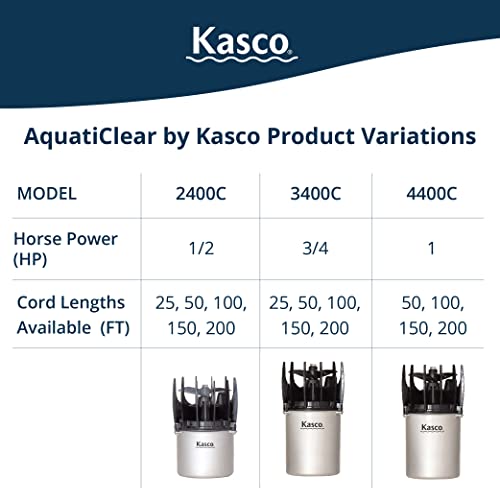 They can be set up in different water depths at other positions.

The moving water is also a deterrent to pond turning as it doesn’t divide water into layers.

Choosing a shallower pond that is less than six feet in depth is also a low-key prevention option.

This is because shallow water has an easier time mixing and maintaining uniform temperature levels, especially with a bit of help from the rain and wind.

This equipment is a great way to add oxygen to water while also helping to lower the thermocline layer to about ten inches, depending on its size. 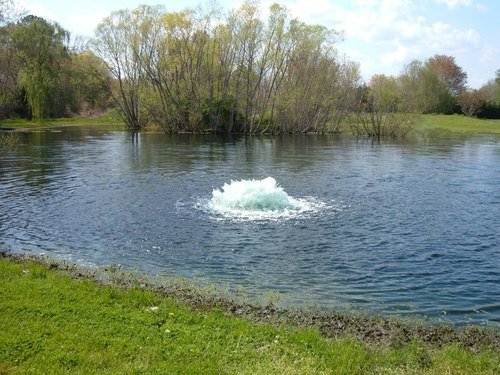 Surface aerators force water from beneath the water’s surface into the air, where it falls back into the water and mixes with oxygen.

Water jets with varying degrees of force break the layers of water.

The additional oxygen will benefit your pond throughout the season, and the mixing helps limit the amount of water moved during turnover.

If turnover continues, the aerator will help save the fish and the pond.

Warmer, less dense water floats on cooler, denser water at the bottom of ponds during the summer.

When temperatures equalize throughout the water column, the pond can mix.

Meaning, bottom water of the pond rises to the surface with all dead and decaying matter, and water from the surface sinks to the bottom, and the pond has suddenly turned or flipped. What Is The Best Way To Recycle Plastic Garden Plant Pots?

How To Store Basil Seeds 15 Outdoor Plants with the Biggest Leaves in the World

Besides drawing attention and being the centerpiece of your backyard, such plants add beauty. They also make a space appear occupied by filling empty spots and providing shades when it’s too sunny.