In Japan, wind chimes (called “furin”) are characteristic symbols in the country, in addition to being beautiful, decorative song-makers.

Japanese wind chimes have a rich history that accompanies them, and they represent something more than just an aesthetic piece.

Furin has long represented the Japanese summer season, and the papers that dangle from them represent the wind, which is supposed to help listeners to feel cool even on hot days.

Below, let’s explore Japanese wind chimes and their significance in more depth. We’ll dive into the following topics about furin:

What Are Japanese Wind Chimes?

In the West, wind chimes are usually collections of different glass, metal, bamboo, or wooden shapes that hang from a string and make music when they blow in the wind.

Now, Japanese wind chimes aren’t all that different since they also make music when they blow in the wind.

However, they serve a slightly different purpose, and they have a special meaning to them.

The Japanese wind chime consists of a blown-glass bowl that has a picture painted inside and gets turned upside down.

This piece hangs at the top of the chime, while a longer paper strip dangles beneath it at the bottom of the chime.

The bowl also contains the zetsu (clapper), which creates the sound inside of the bowl.

And when the wind blows against the paper strip (called the tanzaku), it triggers the string to move the zetsu, which creates the music.

Furthermore, certain parts of Japanese culture have their own renditions of the wind chime, such as:

Japanese wind chimes can come in many variations of colors and decorative designs, depending on where you acquire them.

What Does the Word “Furin” (Wind Chime) Mean?

Furin – the Japanese word for “wind chime” – translates to something like “wind bell”, which isn’t far off since the dome at the top contains a clapper. 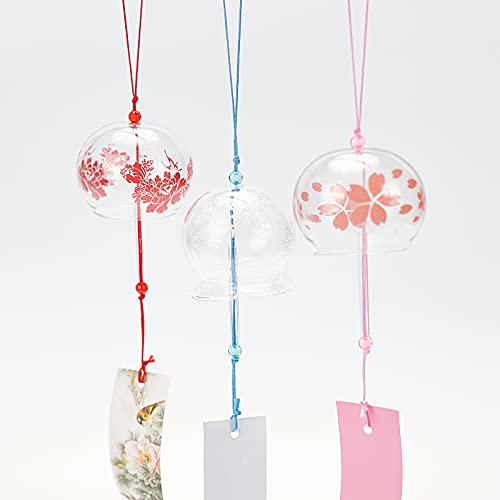 When it comes to the glass bell wind chimes, specifically, these are referred to as “Edo Furin”. “Edo” refers to a part of Tokyo, Japan.

What Is the Meaning Behind Japanese Wind Chimes?

Japanese wind chimes are meant to evoke the feeling of coolness through their sound, even in the hottest summer weather.

This is why many people associate these objects with the summer season in Japan – they are historically linked.

While some don’t believe in the wind chimes’ capability of making one cool just with their sounds alone, some are firm believers in the special meaning behind furin.

Conveniently, the chimes only make noise when the wind is blowing on them, so it makes sense that if you’re outside, you would naturally become cooler if a breeze is blowing.

In any event, furin are a strong symbol of summer, and Japanese people often hang them outside and nearby their windows to hear the sweet sound they emit.

There are other meanings associated with furin, though, including historical ties to evil, the divine, and even epidemics.

In ancient Japan, people would use an older version of the wind chime (known as futaku) to ward off evil that they felt was signaled by strong winds.

They also would hang futaku in holy or sacred places to evoke a feeling of divine presence.

Additionally, beyond these rumored meanings or associations with Japanese wind chimes, there is no denying that these historic objects are representative of beauty.

Don’t Forget to Enjoy 🙂 Their delicate and simple design looks aesthetically pleasing as they dangle and move in the wind, and their song is just as beautiful.

What Is the History Behind Japanese Wind Chimes?

There is more to the history of Japanese wind chimes than meets the eye, and there is more that comes from other countries and their influences on Japanese culture.

Specifically, wind chimes were originally used as fortune teller tools in ancient China, and they were sometimes used to ward away evil spirits.

They were of a different design, meaning, and purpose back then, but much of their essence translates to the Japanese furin that we’re talking about today.

Wind chimes actually didn’t make their entrance into Japan until they arrived there via Buddhism.

Furthermore, glass-making practices didn’t make their way to Japan until the 18th and 19th centuries.

This was when the Dutch people introduced the artistic technique to Japan, starting in Nagasaki. Glass-blowing became more common soon after because people liked it so much. 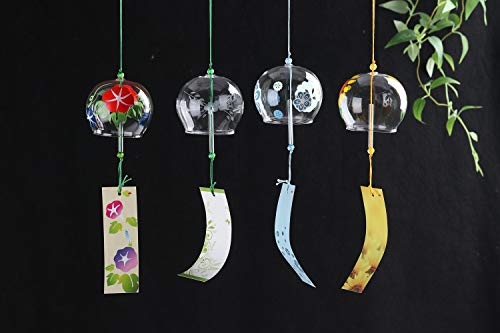 Once glass-making caught on, Japanese people began to make wind chimes (furin) with the notable painted glass dome at the top.

And these are what we now know as the Edo wind chimes from Japan.

Known as “furin” (meaning “wind bell”) in Japan, these wind chimes have a long history dating back to ancient times, and to this day, they carry a meaning that resonates the feeling of summer.

Japanese wind chimes come in different designs and materials, with some influences dating back to China, but they all make a song-like noise when they blow in the wind, signaling coolness even amidst the summer heat.

Previous post : Pumice vs Lava Rock for Plants: Which is Better?
Next post : How To Prune Japanese Maple Bonsai