What Is a Potato Tower? (Explanation and Images)

It seems like everyone is trying to be more portable and engage in DIY home systems for growing crops, including aquaponics systems, hydroponics, smart gardens, portable tomato bags, and more.

At long last we’ve arrived at potato towers, but what exactly is that?

A potato tower is literally just what it sounds like, an above-ground tower of soil, encased in whatever you feel like encasing it in, that’s filled with potatoes. Everything else—the methodology of growing potatoes and soil types—is completely up to you.

Potatoes grow underground and are also known as tubers, however, they’re usually packed up in a hill or mound that’s a bit above the ground.

With the assumption being that potatoes grow better higher, the obvious step to take was to come up with a potato tower.

How Do You Make a Potato Tower?

You start by placing a tire in the desired spot, filling it with soil and your typical soil mixture for potatoes, and planting your seeds. As the potato plant grows upward, you remove the extra leaves, add more soil and a second tire. On and on it goes until you reach the average stack of four tires.

There are different ways to build a potatoe tower while keeping the soil and potatoes encased in the chosen design.

The tire method for building a potato tower is a popular one and will give you a good idea of how this will work.

Of course, the entire idea is to make several stacks, keeping the space very small, so that you can get a ton of potatoes when you simply don’t have the real estate to do it the traditional way.

The problem is, potato towers don’t take into consideration just how potatoes grow. Like any plant, much of the energy required for producing food, flowers, seeds, or anything else, comes from the sun. Water and nutrients in the soil are all well and good but without the sun, the plants will die.

As the tower extends ever upward, you have to cover or cut off leaves in order to pack more soil in and add another layer or stack.

As you do this, you’re reducing the plant’s ability to take in sunlight, therefore decreasing the energy it needs to produce potatoes. 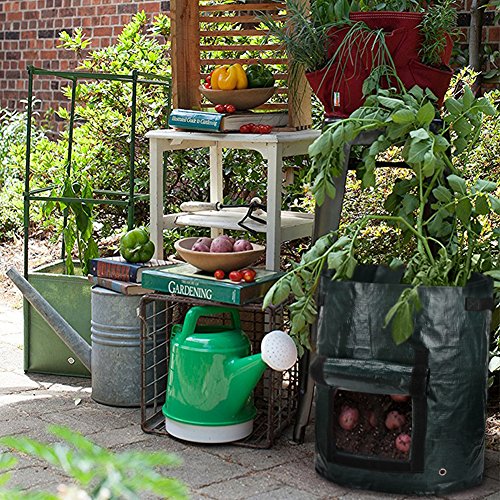 That doesn’t mean that a version of potato towers doesn’t work and isn’t known or out there. There is a better way to do this, albeit without the four stacked tires.

As cool as it looks and as wonderful as the idea of a potato tower sounds (who doesn’t want to grow hundreds of potatoes in as little space as possible?) you have to restrain yourself from going too high and covering up the leaves.

The second problem is, the small gardening and DIY tips and ideas are taking the world by storm.

There are so many clever ways to experiment, innovate, and create new methods to grow and provide food for your family when you simply don’t have much room.

Many of these ideas and innovations are outstanding and work very well.

Smart gardens are a perfect way to grow your own, homemade herbs and seasonings:

However, all of this leads to things like the potato tower, where people are sucked right into the outlandish claims of growing 100 pounds of potatoes in a four-foot stack.

Not only is that not going to happen, but you’ll also waste your time and end up highly disappointed.

Is There a Potato Tower Alternative?

There is an alternative to potato towers and it can still be done while saving space.

Maybe it won’t save as much space as a potato tower would, but you’ll still be surprised by the results and you will also yield far more potatoes than you ever would have with a potato tower.

Tomatoes aren’t the only ones that do well in grow bags.

Once you’ve procured some potato grow bags, lay down plenty of newspaper below the grow bag to keep the weeds out. Don’t forget to cut holes in the bottom of your grow bag.

You roll the edges of your grow bag down to the ground, in order to make it low-profile, to begin with.

Plant your potatoes at the bottom and cover them with soil and mulch. As the potatoes grow, unroll your bag, adding a layer or two of mulch and soil as you go. 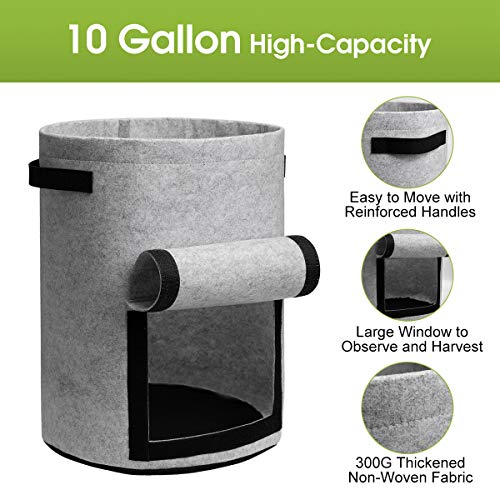 If you’ve been paying attention, you’ll realize that we’re doing the exact same thing as the idea behind the potato towers.

However, the grow bags are no more than 18” in height, nowhere near as high as the potato towers.

In fact, the potato plant stem is going to grow so high out of the top of the grow bag, that it might tip over.

That’s completely fine, and you can even purchase some of the same stabilizers you use to hold up tomato plants in order to keep the stem stable.

Quick Tip: By the time it’s tall enough to tip over, you can probably start harvesting some potatoes, leaving the smaller ones behind to continue growing.

Plant Them In The Ground

Despite the whole idea behind the potato towers being that it is for people who lack the real estate to plant potatoes normally, it really doesn’t take that much space to plant a few rows of potatoes, especially since they can be so productive.

Simply dig yourself a 10’ long trench that only needs to be 6” deep. Plant your potatoes between 8” and 12” apart and cover them with loose soil and mulch. It’s a good idea to mix straw, hay, or compost into the covering soil because it helps with moisture retention.

All you have to do after that is water them whenever the soil starts to get dry and wait for the first sprouts of plant growth to reach the surface.

You don’t need to pile it on too high.

Remember, the primary failure behind the potato tower is the fact that there aren’t enough leaves exposed for the plants to get the nutrition they need through photosynthesis.

Anything you decide to do will work so long as you follow the methodology behind the above two examples.

So long as you plant the potato no more than 6” deep and allow the stems and leaves to have plenty of exposure, you’ll have a positive harvest.

You can use pots in the same way that you use the grow bags. There are also hydroponic and aeroponic methods.

Research has shown that you get more production from the aeroponic method than from the traditional method of growing potatoes in the soil.

Hydroponics is also an outstanding method for growing potatoes.

In Fact: It’s considered one of the easiest ways to grow potatoes out of all of the DIY, home-gardening techniques.

Why Are Potato Towers a Growing Trend?

What happens when you enter a phase of society where people are embracing a new and innovative approach to something, others will take advantage. 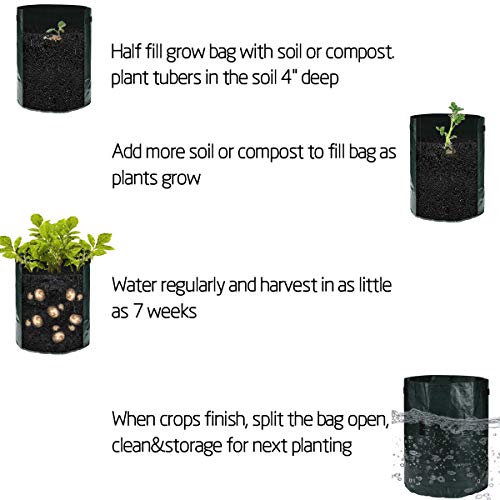 You can grow potatoes using the potato tower method, however, you’re not even going to get a 1:10 yield out of it.

It’s the same thing as those advertisements you see on blogs and throughout the internet.

Chain letters and viral, false advertising are nothing new, it’s simply the fact that the perpetrators of these hoaxes generate new ways to do it.

You should always go on the defensive and start doing your homework when you hear that you can grow hundreds of pounds of potatoes in just a four-foot tower.

It’s the same old claim that you will get something extraordinary with very little effort and expense on your own part. The difference here is that there really are ways to grow a lot of potatoes without having to kill yourself.

Only some of those ways are listed above and DIY home-gardening, automation, aqua, aero, and hydroponics are all brilliant and cost-effective ways to grow potatoes or any other crop for that matter.

Potato towers are a cool idea and they fall right in line with the explosive popularity of DIY home-gardening.

Unfortunately, it’s probably one of the worst methods for growing potatoes imaginable.

Fortunately, there is plenty of evidence, available on the internet and spreading, that refutes potato towers as the weak method that it is.

With all of the available methods out there for growing potatoes effectively, with a high level of production, you don’t need to go the potato tower route.