Do Mushrooms Have Roots?

But if you find mushrooms growing in your garden (and you didn’t plant them), you’re probably keen to remove them, especially if they might pose a threat to your children and pets.

As we know, rooted plants can be difficult to eliminate entirely but do mushrooms have roots?

Mushrooms are unlike other plants as they do not have roots. They are, in fact, a type of fungi which means that they grow differently to other plants. Instead of roots, they have a component known as mycelium. These thread-like structures are what connect the fruiting part of the mushroom (the bit above the surface) to the ground below.

As far as plants grow, mushrooms are one of the most interesting.

Key Takeaway: Not only do they not have roots, but they don’t have leaves nor do they have stems. Let’s get to know this unique plant a little better.

Is a Mushroom a Plant?

We have referred to the mushroom as a plant, but is that really what it is?

The answer is no; mushrooms are not plants, they are fungi and while they do grow in similar locations to plants, there is a clear difference.

Plants contain a chemical known as chlorophyll which helps them to manufacture their own food. But this is not something that a mushroom can lay claim to.

Where plants have root systems that penetrate into the ground to draw out moisture and nutrients, mushrooms have mycelium.

These threads grow out of the bottom of the mushroom and are very fine. Looking at them, they form a dense white cloud of threads which is sometimes known as spawn.

The mushroom spores are very small particles, no bigger than a piece of dust, which it sheds and this is where the mycelium comes from.

As the mycelium grows, it begins to develop small buds of tissue, white in color, which push through the surface of the soil and break out creating the fruiting part of the fungi.

This umbrella-shaped fruit is that part that we see and sometimes eat. But the process doesn’t stop there. Underneath the cap of the mushroom, there are a series of gills, sitting close together.

This is where the mushroom spores are produced and when they are ready, they’ll drop away and be blown to a new location; restarting the mushroom reproduction cycle once again.

Does Not Having Roots Make Mushrooms Grow Slowly?

One of the most fascinating things about the mushroom is that it grows so quickly.

There is not much else in nature that grows as rapidly as the mushroom.

These amazing fungi can take as little as one day to fully grow with bigger species usually taking between three and four days!

Try growing your tomato plants in that time!

So How Do Mushrooms Feed Themselves?

Earlier, we mentioned that mushrooms do not have a chemical known as chlorophyll.

This is a green substance that plants use to make food through a process called photosynthesis.

But surely, the mushroom must have another method?

Well, it does. Similar to how it is unique in the way that it grows, it continues this uniqueness in the way it feeds.

Good to Know: Mushrooms have digestive enzymes which are released outside of themselves. These enzymes then break down food before the fungi absorbs this back into itself, providing nourishment.

Can I Grow My Own Mushrooms?

It is entirely possible to grow your own mushrooms at home but the process is somewhat different from what you might be used to.

This is because mushrooms do not grow from seeds but rather spores.

Obviously, you will need to get your hands on some mushroom spores but these are so small that they cannot be seen with the naked eye.

The good news is that there are plenty of mushroom growing kits out there that contain the spores, ready for you to grow. 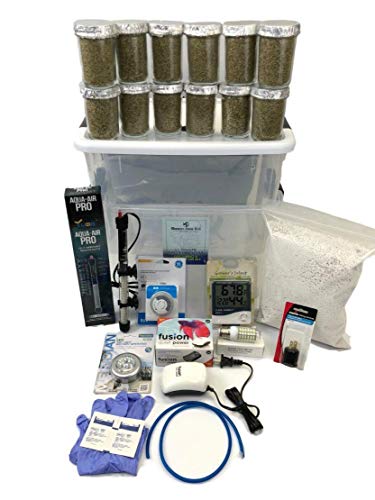 However, if you want to, you can source mushroom spores yourself and try to start them off.

It’s important to remember that the spores must be applied to materials like sawdust, grain, wood chips, or straw, and not soil like the plants you will normally grow.

You will also need to find a warm, humid environment if you want your mushrooms to do well.

Many people opt to grow them in the basement, provided that you can keep the temperature between 55ºf and 60ºf.

Remember This: While the mushrooms don’t mind a little light, they’ll thrive best when placed in a dark location.

Mushrooms do not have roots.

These are fungi and are different to plants. Instead of roots, they have thin thread-like structures known as mycelium which are the first thing to form.

This means that growing mushrooms at home is very different to anything else you may have grown but in the right conditions, it is more than possible!