Porch Light Colors: What Do They Mean?

Porchlight colors are more than decoration to your home’s facade – each has its specific meaning.

Colors can affect you more than you realize; some show support to causes and movements, while others evoke emotion.

Here are the meanings of different porch light colors.

Blue is primarily used to support police officers and other law enforcers.

The cause started in the late 80s when Dolly Craig lit her front window blue in memory of her son-in-law, who died in service.

It later grew into a nationwide support group known as the Project Blue Light Movement.

In April, homeowners change their porch lights to blue to spread awareness about autism. This is an initiative of a nonprofit organization known as ‘Autism Speaks.’

However, many people in the spectrum are against the idea of using blue because it implies that the condition is predominant among boys.

As a Result – The number of individuals using blue porch lights for this cause is decreasing.

More than a million Americans have the condition, but most aren’t diagnosed. Campaigns for the disease usually occur in September.

Besides attending festivals, civilians show their appreciation to former military officers by lighting their porches green throughout the month.

The primary reason it’s preferred over other colors is that it matches the military uniforms. Moreover, green signifies health and hope.

On March 17, Roman Catholics celebrate St. Patrick’s Day by lighting green porch lights. It’s the reason why this holiday is called the ‘Green Out Day.’

Rumor has it that green shows solidarity with the saint’s native Ireland, but some argue it has nothing to do with the country’s flag.

Like Blue – Green also raises awareness about diseases. Every May, some homeowners light green bulbs to spread the word about Lyme Disease, a tick-borne bacterial infection that causes fever, headaches, joint pain, and rashes.

It’s often misdiagnosed because its symptoms are similar to other conditions.

The governor started the movement at the pandemic’s peak, but it still shines on despite a significant reduction in the number of COVID-19 deaths.

While red appears on many porches in February, it’s primarily used to celebrate Heart Awareness Month.

Cardiovascular health issues are a leading cause of death in the United States.

The American Heart Association encourages people to use red lights to raise awareness and fundraise for the condition.

Lovers light their porches red to express passion for their significant others.

Towards the end of October, you are likely to notice dimming red lights on porches.

Additionally, people use red porch lights to celebrate the courageous acts of firefighters.

You can notice the red lights on May 4, International Firefighters Day.

As Earlier Mentioned – Some autistic individuals are against using blue porch lights to spread awareness of the condition. Instead, these people use red lights.

In 2016, people misinterpreted a meme saying that red means that a house doesn’t have guns. After two-year research, WUSA9 in Washington DC disproved the theory.

Most people know the infamous red-light district. For this reason, some people associate red porch lights with brothels and commercial sex workers.

The campaign started 18 years ago in King County, Washington.

The Covington Domestic Violence Task Force, behind the initiative, offers psychological, physical, and emotional support to victims and survivors of domestic violence.

Besides the support, the task force holds several seminars to educate society on the adverse effects of domestic violence.

It encourages homeowners to light purple bulbs to support victims, survivors, and people who have to put up with abusive relationships.

Did You Know? The purple light movement is particularly popular in October, during the Domestic Violence Awareness Month.

The lights honor people who lost lives to domestic violence and victims of the crime.

Every March, homeowners change their porch lights in solidarity and support individuals battling the condition.

Orange porch lights commemorate the mystery behind the deaths of two teenage girls whose bodies were discovered in Delphi, Indiana.

The movement started after a month-long campaign by locals calling for an investigation into the murders.

Although the killer is still unknown, the orange light campaign has spread countrywide and is used to show support to the police.

For Example – Orange porch lights are also a common sight toward the end of October. Because of its warmth and liveliness, many people use orange as décor for Fall and Halloween parties.

When you apply the right hue, it can create the scary atmosphere that Halloween lovers desire.

After skin cancers, breast cancer is the most prevalent malignancy in women.

It also affects a few males and causes millions of deaths yearly. However, it’s treatable if diagnosed in its early stages.

Many Americans celebrate Breast Cancer Awareness Month by changing their porch lights to pink in October.

There are also other minor instances where pink porch lights appeared in America.

A Few Years Ago – An elementary school in Wappingers Falls, New York, encouraged students and teachers to adopt pink lights in solidarity with one of them diagnosed with a rare type of leukemia.

In 2016, Nebraskans lit pink lights in memory of a family who perished in a home fire.

Traditional lights tend to attract moths, which can be challenging to clean after the following morning.

If you are dealing with this inconvenience, you might want to install yellow porch lights.

Its dim and warm appearance confuses and turns away the insects, as they cannot trace the actual light source.

Yellow porch lights are also useful to people living in areas that experience extreme winters. Their warmth and brightness are precious when the sun isn’t visible.

It’s easy to assume that a porch light is faulty when you see it blinking.

While this might be the case, blinking lights have other meanings.

The most common use of blinking porch lights is to seek emergency assistance. A homeowner can flash their porch light when needing an ambulance, firefighters, or the police.

The flashing lights make it easier for emergency response teams to spit the house in need, especially in a crowded neighborhood.

A few people use blinking lights during Halloween. The flickering creates a frightening effect.

Sometimes, blinking lights might result from children playing with the switches.

Psychological interpretation of colors might be subjective and contextual, but there’s no denying that different hues affect choices, behavior, and moods.

Here are the psychological significances of different porch light colors.

White is a universal sign of innocence and purity. It’s why most wedding gowns are white.

The color also symbolizes peace and blends well with natural light, making it a popular pick for outdoor lighting.

Warmer whites create a welcoming atmosphere when used on your porch lights. Some shades of white evoke a sense of youth and modernity.

Furthermore – The neutrality of white means that it works well with all types of décor, rustic or contemporary.

Yellow is a bold and striking color that creates warm and welcoming environments.

It can also improve your mood, as it’s known to increase happiness and optimism.

The color also shows that you’re more likely to take risks than the average person.

The brightness of yellow makes it an ideal pick for situations that require alertness, such as emergencies.

Regarding emotion, pink gives off love and romantic vibes.

Many also associate the color with the female gender.

Regardless of sex, the color shows kindness.

People associate green with several concepts and objects, including:

Some consider green peaceful and relaxing because it’s abundant in nature.

Orange is an eye-catching bright color that can uplift your mood and make you playful.

When used in the right amounts, orange is exciting and vibrant.

However, it can be overly ostentatious and an eyesore if overused.

Red is arguably the most intense color on the warm side of the visible spectrum.

It evokes strong emotions and has a significant psychological effect. 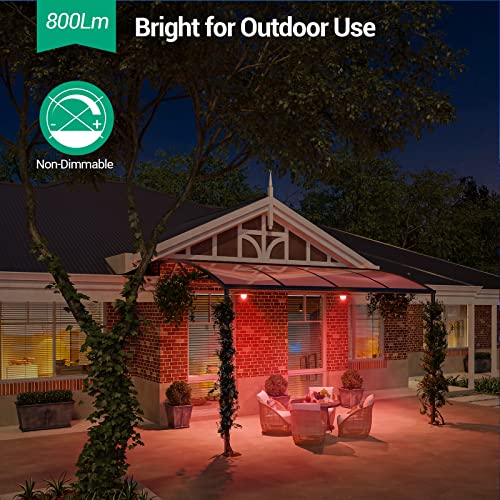 Red is a practical choice if you want to portray your proactivity and boldness. The color is attention-grabbing and draws others towards you.

Most warning signs are red. Besides warning of imminent physical danger, the color alerts people of conceptual hazards.

For Instance – A red flag is a warning about undesirable outcomes, such as toxic relationships.

Purple is a popular choice for royal and noble families.

It also signifies mysticism and spirituality.

Since it’s a blend of red and blue, purple is a unique color that is warm and cool.

It’s also the reason for purple’s affiliation with mystery.

Purple has many shades. The lighter ones signify romance, while darker hues are common during mourning and other sad events.

Moreover, a great color can increase your home’s visual appeal.

When purchasing a light, choose LED bulbs over incandescent bulbs. Their efficiency means that you don’t have to pay expensive monthly bills.

Lastly, LED lights are durable, and some have multiple colors, eliminating the need to buy a new bulb whenever you want to light up your porch differently.

Previous post : How Big Does a Backyard Need to Be for a Pool?
Next post : What Is Ultrasonic Fogger Aeroponics?