Can You Use Two Hands in Giant Garden Jenga?

At some point, in the 1970s, a bunch of wooden toy blocks turned into the phenomenon that later became known as, Jenga.

It was only a matter of time before Giant Jenga came along.

However, as Jenga evolved, did the rules remain the same?

For instance, can you use two hands in Jenga?

The rules for giant Jenga are exactly the same as they are for regular Jenga and you can always use two hands. However, you can only touch a single block with a single hand at any given time. You can use your other hand, but only after you are no longer touching it with your first hand.

Even though the woodblocks are much larger in Giant Jenga, they’re not so large that you can’t pull and place blocks with one hand.

Just like regular Jenga, you can change hands, so long as you’re not touching the block with both hands at any given time.

Of course, any time that there are rules, there are violations of the rules. Every action has an equal and opposite reaction, after all.

Fortunately, rule violations don’t make for as long a list as the general rules do.

That just about sums up the rule violations for Jenga. We could sit here and list more, but it would simply be stating the obvious.

For instance, you can’t knock the tower over just because you’re frustrated. 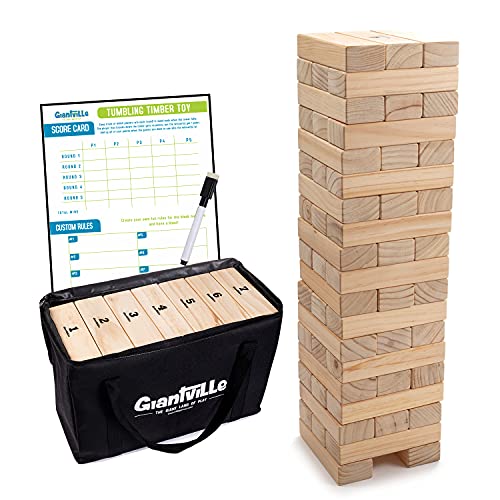 Are the Rules the Same with Dice?

Playing with dice is a common variant of Jenga. It’s common enough to merit rules clarifications on almost every Jenga-focused website, so it deserves some mention here as well.

Jenga with dice is a unique variation on the game where the roll of the dice determines how you build your tower. The game is played with two players who build the tower as the dice dictates.

Of course, there’s more to it than that but the name of the game is to remove and place blocks according to the roll of the dice, with each player competing to see who can build the most before the tower collapses.

However, although these rules make for a drastic change in how the game of Jenga is played, whether it’s outdoors with a giant Jenga set or indoors on a small set, the standard rules from the original game of Jenga still apply.

No matter what the face of the die reveals, you can only operate with one hand—interchangeably if you want—and only one hand at a time.

Like regular Jenga, you can start pulling a block with your left or right hand and finish pulling and placing with the other.

However, never at the same time.

How Many Pieces are in Giant Jenga?

The number of pieces is the same as in a regular game, at 54. Of course, with the rule about one hand, you have to either purchase a giant Jenga set or be very careful in how you construct one.

That’s right, you’re more than welcome to build your own Jenga set if you have the lumber and the tools available. But if you want to stick tightly to the rules, you have to build a set that is reasonable.

That means, if the shortest person in your family is 4’3”, you don’t want to go build a Jenga set that stands at 7’ tall.

Not only will they not be able to reach the top, but they’ll also be forced to use two hands to pull the blocks.

Official sets that you can purchase in-store are large—sometimes surprisingly so—but are very lightweight.

They accomplish this by using very light wood materials or by hollowing out the pieces, removing the dead weight of the center of the blocks.

The idea is to build a Jenga set that is similar to those that you can buy from the shelves or order on Amazon. It’s important to keep it as lightweight as possible and keep the stack to somewhere between 4’ and 5’ in total height.

In this way, everyone can participate and the “one hand at a time only” rule can still be in effect and the same for everyone.

Read ” Can you paint giant Jenga blocks ” as many sets come in plain untreated wood. You may have the wish to paint them. But which type of paint should you use. We’ll explain, all

While the one-hand rule is a common question when it comes to the game of Jenga, the reality is, the rules don’t change at all when you go from regular, indoor Jenga, to the gigantic, outside blocks variation.

It’s good to have a level of continuity, however, you’re playing at home with your family, not on a live, world competition on ESPN.

If you want to use two hands, set the rule in place before you get started and you’re more than welcome to do so.

Previous post : How Tight Should a Spikeball Net Be?
Next post : How To Play Jenga with Dice?