How Tight Should a Spikeball Net Be?

The game of Spikeball is becoming mainstream and if you didn’t know about it, you do now.

It’s a variation of tennis, wall ball, and volleyball and is played on a 360° court by slapping a small ball into a small, personal trampoline-sized net on the ground.

If you’re setting one up for the first time, you may want to know, how tight should Spikeball net be?

Unless you have some sophisticated, physics reaction software, you have to play it by the trial and error method. The net needs to be tight enough so that when you drop the ball from 3’ above the net, it bounces a minimum of 12” and a maximum of 15”.

The net is one of the more important aspects of the game of spikeball. It has to be tight enough that you get a good bounce and anyone can properly spike the ball into it without it bouncing into the stratosphere.

How to Install the Net Properly

When you pull the equipment out of the box, you’ll get a ball or two—which are air filled but generally soft and squishy—a separate net, game instructions, and the bet assembly framework.

It looks very similar to a small, personal trampoline, where you fit the pisces together until it forms a circle that is approximately 1 yard in diameter. The net comes in its own bag and you will have to remove it and spread it over the freshly assembled ring.

The net ring comes with foldable legs to give the item some level of portability. Once the ring is assembled and the legs are set on the ground, you can start installing the net.

Its a lot like installing the trampoline material on a large or small trampoline.

Once you have the net installed, you can test the level of bounce you’re going to get, but only after you have some air in the balls, which is another important aspect of the game setup.

How Much Air Should be in the Ball?

In order to make sure that your net is tight enough to make for a good game, you have to get the appropriate amount of air in the ball. It may seem like a silly setup process, after all, who cares as long as its aired up, right?

Well, the amount of air in the ball will determine what kind of bounce you’re going to get off of the net.

As aforementioned, the game is not going to be any fun if you slap the ball into the net and it bounce so high that it ends up on the roof of your house.

You want the ball to be squishy, as in, you can squish it in your hand. It still needs to maintain enough air so that its perfectly spherical and has some bounce, but not so much that an easy dribble will bounce three or four feet up.

A standard bounce should be enough to return to your hand. Once you have the ball inflated to the perfect amount, you can go about adjusting your net. 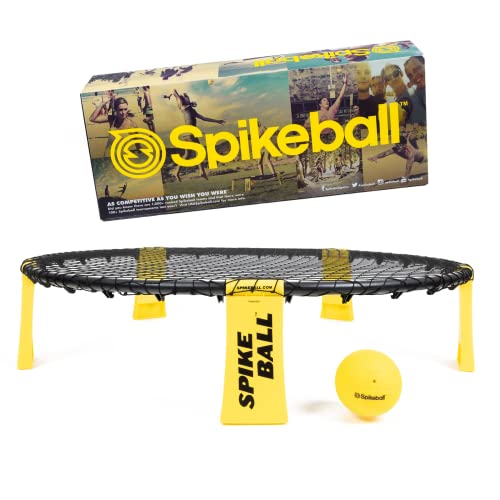 Remember, you want the net to be tight enough so that you can drop the ball from three feet up and get a 12” to 15” bounce off of the net.

The game is called Spikeball precisely because you will be spiking the ball into the net from wide and sharp angles.

So, while a 12” to 15” bounce may not seem like enough, you will discover that it is more than enough when you are strategically trying to spike the ball into the net so that the opposing players can’t get to it on the rebound.

I highly inflated ball and a very tight net means that no one will ever get to the ball once its been spiked because it will sail off 20 or so yards or more every time its spiked. That’s no fun for anyone.

The way the net is designed to hook on the ring makes it so that even tiny adjustments can make a big change.

You can simply work your way around the ring, pulling one link in the net tighter before hooking it over and under.

You only want to make small adjustments at a time. Its easy to overdo it. Just pull one link in the net tighter each time, until you get the level of bounce that you want.

Just because you tighten one link on one side, doesn’t mean you have to do the same on the other.

You’re not aiming for perfection here, because that’s hardly achievable here. What you want is a decent and authoritative bounce each time you spike the ball.

That way, everyone can enjoy the game and have an opportunity to make a play on the ball, even when you spike it .

Previous post : Way’s to Make your Cornhole Board Slick
Next post : Can You Use Two Hands in Giant Garden Jenga?