How To Play Jenga with Dice?

Just when you thought you had your Jenga strategy figured out, there is another way that you can play that will up the excitement.

In the traditional game, you get to decide which block to go after, able to push and poke blocks to see where your best chance is.

With dice, your roll is decided for you, making it a bit more challenging.

To play Jenga with a twist, get 1 to 4 dice and your Jenga blocks. Set them up as you normally would and decide what you’d like your dice to count for. They can either determine which block to pull out or the number of blocks you need to pull out each turn. Both are tons of fun and pose a challenge for those you’re up against.

Below, we’ll get into a bit more of how to play Jenga with dice and include some tips to keep your reputation as a champ going strong.

Why Add Dice to Jenga?

We know what you’re probably thinking.

Jenga is a classic and classics should be played the same.

While we’re not opposed to playing the traditional way (we love it too!), we also like to change things up from time to time. 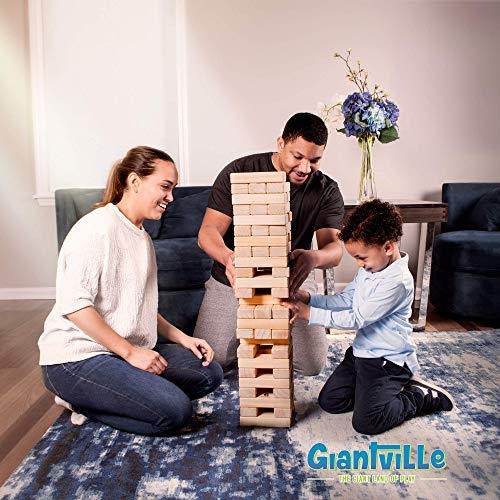 When you add dice to your Jenga night, you’ll have you get better with:

All of that comes from one of your favorite games.

Plus, you’re sure to have a few laughs when the most challenging block to pull out lands on you.

You’ll get a shot to push your limits and maybe unlock skills that you didn’t know you had.

How Do You Play Jenga with 4 Dice?

4 Dice seems like a lot but, when you think about it, the max you can get is 24.

You could use this as a way to choose the row that you pull from or the number block you have to pull.

To play, you’ll only need Jenga and 4 dice. Set up your Jenga as normal and choose who will go first.

The first up will roll the dice, count them, and then have to pull out the block that corresponds to the amount.

After they pull it out, they have to stack it on top of all the others, doing all of this without tipping the whole thing over.

It’s challenging, fun, and sure to become a new game night favorite.

How to Play Jenga with Colored Dice?

There is another version of Jenga that has colored blocks and dice, both of which make the experience one you’ll rave about.

While the strategy is much the same after setup, you’ll need to keep one key thing in mind when playing Jenga with colored dice.

Just like other versions of Jenga, you’ll set up the blocks in the tower-like form, only this time doing so by color.

Separating them by color will allow you to choose the corresponding dice that matches, selecting the color and block that you roll.

Once you have your setup ready, use a cup and have the first player choose a die.

Keep In Mind: Some blocks will be easier than others, which makes it a lot of fun when it comes to getting your Jenga on.

How to Become a Jenga Master?

Jenga is a fun game and requires a bit of skill to be declared the overall winner.

In the traditional game, you can poke and push to find the block that is easiest for you, though that changes when you’re using dice.

You may have to pull out a block that you would not normally touch, which requires some skills.

Though it might be challenging in the beginning, you can become a Jenga master in no time following these tips.

Without getting into all of the talks about pressure stuff, it’s much more effective to push than pull.

When you pull, you’re more likely to disturb the balance, causing the tower to come crashing down.

Even if you feel like it’s a block you can’t remove, push on it gently and watch the magic.

If you’re an avid Jenga player, you’ve likely noticed that you can really feel the blocks.

When they’re simple to pull out, you know and when they move all the blocks above them, you also know.

Using that knowledge, you should really focus and get a feel for how the block is reacting to your push, using that to your advantage.

We get used to using our dominant hand for everything and often don’t think about switching it up.

There are a few reasons why you should, as you’ll likely realize that you react differently and also put different pressures on blocks.

If you have a difficult block, use your non-dominant hand, doing so as a way to push blocks out a bit more smoothly.

You’ll have less strength, and can ease it out, switching to your dominant hand when it’s time to focus on technique.

If you’ve ever wondered how to play Jenga with dice, then our tips are a good place to start.

There are so many ways to change up your Jenga playing experience, including adding one die, multiple dice, or even throwing colors in there too.

Traditional Jenga is great but, the next time you have friends or family gathered around to play, throw them a curveball and see how they fall in love with this new and challenging way to play one of the most-loved games on the planet.

We promise they’ll come back for more, maybe even making a competition out of it to see who really has the best techniques when the choice is up to the dice.

Previous post : Can You Use Two Hands in Giant Garden Jenga?
Next post : How Many Pieces Are There In Backyard Jenga?