What Is the Best Soap for Slip N Slide?

When summer arrives, we’re often looking for new forms of entertainment, either for ourselves or for the kids.

When you’ve had enough of the usual summer garden play like soccer, tennis, or trampolining, many parents reach for the hose pipe to help their kids cool off.

Filling a paddling pool won’t cut it for older kids though and can be dangerous for really young kids, so what other options are there?

What is a slip ‘N slide?

The original children’s toy Slip ‘N Slide was created in 1961 by Robert Carrier.

It was manufactured by a company called Wham-O, which was also responsible for other great toys including Silly String, Frisbees, and Bubble Thing, the first large-scale bubble wand.

The toy was simple: it was a plastic sheet sewn into a tube shape.

The tube attached to the hose and sporadic holes along it caused water to spray onto the surface.

This meant the slide became very slippery when wet, allowing users to glide along it.

There are now lots of different Slip ‘N Slide variations, including ones with pools at the end and ones made to be like hockey pitches.

The great thing about these Slip ‘N Slides is that there is no requirement for soap at all!

Making your own Slip ‘N Slide

Though Slip ‘N Slides are relatively cheap as far as garden toys go, you don’t need to buy one to have fun in the garden.

Making your own Slip ‘N Slide is entirely possible and easy to do. 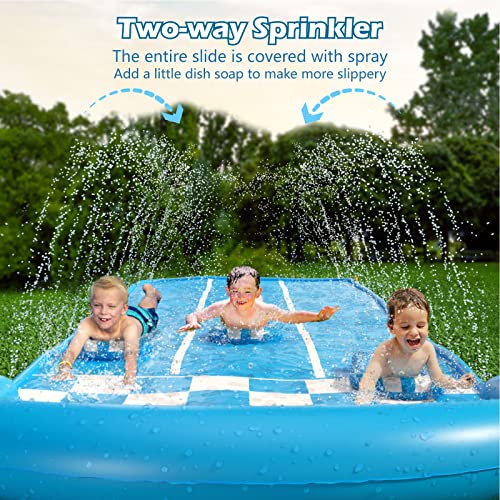 All you need for a homemade Slip ‘N Slide is a sheet of plastic, a hose, and some soap.

Unlike manufactured slides, homemade ones usually require lubricant as the water is only sprayed at one end and not all the way along the plastic.

You have lots of different options when it comes to making your slip n slide slippery.

Most people commonly use either soap or oils.

Here are some options.

You can, for example, use baby oil to make your slide more slippery.

Not only do you slide all day long, but your skin is really soft at the end of the day.

However, there are some issues with using baby oil. Firstly, it is obviously very greasy, and some people might not like how it feels.

It is also expensive to use as you will need a lot. Finally, it probably isn’t very good when it ends up on your lawn or down your drains.

It will also leave an oily film on the plastic, which means cleaning it and storing it away isn’t as simple.

Dish soap is much cheaper than baby oil and is very slippery.

What’s more, children will love how bubbly this gets as they slide!

Though this is cheap, you need to remember that is designed to get tough greasy stains off dishes. This means that it is quite harsh on the skin.

For anyone with sensitive skin, especially young children, it can cause dryness and soreness. Dish soap is also extremely painful if it gets into your eyes!

Another slippery choice is shower gel. Shower gel is designed to be used on the body so it isn’t as harsh as using dish soap.

It will still lather and create bubbles and will smell great too.

Unlike dish soap, it won’t dry out your skin – although spending a long time in it isn’t ideal.

Shower gel doesn’t cost the earth, but it is more expensive than dish soap and you might need to use more of it.

Just like dish soap, it can still sting the eyes.

If you’re doing a slip n slide for young children, using baby shampoo or baby soap as a lubricant is probably the best idea.

You know it won’t cause harm and it also has the added benefit of not stinging the eyes. It is, however, more expensive.

Any food-grade oil like vegetable oil or olive oil is good as a lubricant.

Being an oil, these won’t evaporate on the slide and won’t cause harm to the skin either.

Like baby oil, though, these oils will stick to your skin and clothing and can be hard to wash out.

If you do decide to use cooking oil, you should probably choose soybean oil or flaxseed oil rather than vegetable oil as these are more heat resistant.

What not to use

Some people advise using laundry detergent for slip and slide.

For most people, laundry detergent is never in contact with their skin.

It might be ok to wash your clothes in but the amount that then touches your skin from your clean and dry clothes is minimal, so this is not recommended!

Another suggestion you might hear is petroleum jelly. While petroleum jelly is very slippery, it’s also very thick and hard to clean – especially from hair.

It’s always best to use a lubricant that can be easily rinsed. Petroleum jelly is also toxic if swallowed and can be harmful if it gets into the eyes too.

Things to be mindful of

Safety is paramount and usually, when using a slip n slide, the UV levels are quite high.

If you’re going to use soap (or even oil) on your slide, this will remove sunscreen.

Always ensure you put your slide in a shaded area and encourage children to cover themselves up from the harsh rays of the sun with long sleeves and hats. 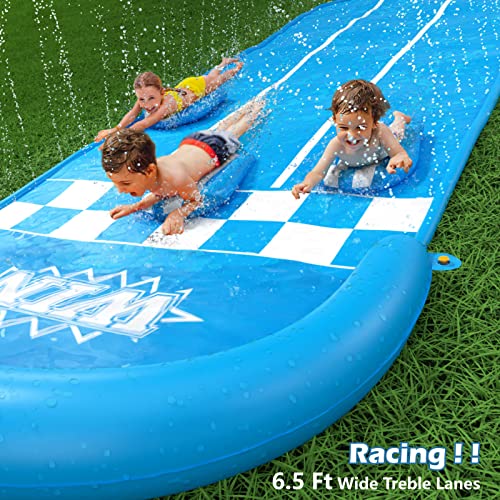 After looking at all of the options, you have a lot of choices.

If you’re going for ultimate safety as well as slippiness, no-tears baby soap or shampoo is your best option.

This is delicate on gentle skin and won’t sting the eyes.

Always make sure, though, that young children are well protected from the sun’s rays when using soap on a slip ‘n slide.

Previous post : How To Prevent Gutters From Freezing In Winter?
Next post : Hanging Baskets For Strawberries (DIY Or Buy)