Lanterns are widely used in gardens around the world with so many different types available.

They create a beautiful glow and can make your garden feel like a wonderland.

But did you know that in Japan, the stone lantern is one of the most popular and it is by no means a modern invention.

These stunning and robust lanterns date back thousands of years and they weren’t only designed as a way of casting light over an area to make things easier to see.

What’s interesting is that these lanterns were designed to be symbolic and their meanings are truly beautiful.

In This Guide: We will be exploring the history of the Japanese stone lantern, what they mean, and why they’re so popular both in Japan and around the globe.

The History of the Japanese Stone Lantern In Gardens

A traditional Japanese garden is known as a Nihon Teien and these are littered around the country as one of the most popular attractions for both natives and visitors alike.

Moreover, these stunning, well-manicured gardens are found at the homes of the rich and famous as well as at temples and shrines.

However, there are some Nihon Teien that stand out more than others and that are considered to be among the very best.

These include the three great gardens, also known as the Nihon Sanmeien.

If you have a love of beautiful gardens and are in Japan, we would strongly recommend paying any of these three a visit.

There are a lot of different things that make a Japanese garden so interesting and visually appealing including pruned hedges which often form an enclosure as well as traditional walls made from things like rock or stone.

Water is also heavily featured in the Japanese garden and this is accented with things like bridges or stepping stones.

These bridges and stepping stones may quite often lead to a Japanese tea house which is where you are likely to find the Japanese stone lantern.

In the Japanese language, these lanterns are known as ishidourou and are used to bring harmony and balance to the garden.

They’re considered to be one of the most iconic features of the Japanese garden and have gained popularity in gardens across the West.

What’s surprising is that the concept of the stone lantern wasn’t a Japanese one; in fact, these lanterns were brought to Japan from China and Korea.

Even more interesting is that the stone lantern is thought to have roots in Japan that date as far back as the 6th century, so one could only hazard a guess at how long they were used in other countries before this.

One of the main reasons that these stone lanterns suddenly became so popular in Japan was because of the introduction of Buddhism in the country.

Buddha had taught that light would help to overcome sins like ignorance and that the symbol of the light would always serve as a reminder of the ideas of this great teacher. 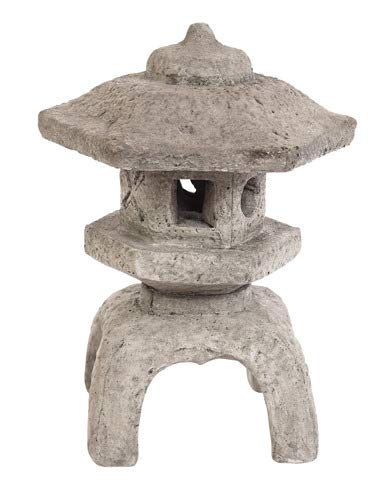 The notion of using lanterns as a symbol wasn’t limited to Buddhism and it wasn’t long before stone lanterns were appearing in Shinto shrines around Japan.

While they were initially used as a votive, people naturally began to then use them for practical reasons to illuminate the way during hours of darkness.

Up until the 16th century, stone lanterns were mainly used by religious communities but they soon began to gain popularity for secular communities.

By now, these lanterns began to take on a new aesthetic and many designs were being created.

New materials were being widely used and today, one of the most common is granite which is used to make a huge number of Japanese stone lanterns for use in domestic and commercial gardens.

While Japanese stone lanterns remain incredibly popular today, it may come as a surprise to learn that some of the very first lanterns are still preserved.

There is one lantern known as the Taima-ji which is thought to be as many as 1300 years old and is located in Nara, Japan.

While this is extremely special, it is by no means the only survivor of the Asuka period and there are thought to be over 100 other lanterns still in existence.

Many of these can be found in Kyoto.

How the Lanterns Are Made

The stone lantern features a pedestal on which the other components are placed.

What’s amazing about these lanterns is that there is no bond holding everything together, but all of the parts just rest on top of one another.

On top of the pedestal is the shaft and above this, you’ll find the platform that has a compartment for the light.

Over the top of this, there is a roof and usually some kind of decoration at the very top.

There are various types of lanterns out there and while the general make up is the same, the design is slightly different.

For example, the Korean lantern has a much larger light compartment while the shaft is a lot shorter. The Taima-ji lantern is incredibly elegant and typically much taller than other styles.

Finally, there are garden style lanterns that veer away from the more traditional designs one might see at a temple or shrine.

The beauty of Japanese culture is that almost everything has a meaning or symbol and lanterns are certainly no exception to this rule.

Generally speaking, the light of the lantern represents brightness, love, and protection from anything evil.

However, different types of lantern are known to have different symbolic meanings and their very own history.

The tachi-gata is a type of pedestal lantern which quite often features a lotus flower as its apex decoration.

This flower represents wealth and career progression in Japanese culture. However, there are other meanings to the tachi-gata lantern including purity.

You’ll also find these lanterns representing the birth of an important person and even the month of December!

Yukimi-gata are well loved because of their ability to catch snow on their wide roofs.

For this reason, they are sometimes called snow-viewing lanterns. They have a long history that dates back as far as the Edo era and are believed to be a symbol of the circle of life.

They have a particularly close representation of the mother figure.

Next is the ikekomi-gata which is sometimes called a remembering lantern and is one of the most popular types.

What’s different about this type of lantern is that rather than representing Buddhism, it’s a representation of Christians in Japan.

For This Reason: You will normally see religious figures such as the Virgin Mary on these lanterns.

Finally, there is the oki-gata which is typically used in gardens and is usually made from granite.

What these lanterns symbolize is finding beauty through imperfections as well as showing how impermanent the natural world is.

Japanese stone lanterns have their roots in other countries such as China and Korea but when they were brought over to Japan in the 6ht century, they quickly became a piece of this country’s rich heritage.

There are many different types of lantern, each having their own symbolic meaning.

While they were traditionally used in formal settings such as shrines and temples, they can now be found adorning gardens in Japan and beyond! Are Sticklebacks Good for Garden Ponds or Wildlife Pond?

Can You Build A Pond On A Slope?