Both seesaws and teeter totters are excellent pieces of playground equipment that encourage collaboration and patience.

They’re also great for developing a child’s upper and lower body strength during their use.

If you’re considering playground equipment for your backyard, you might ask yourself what’s the difference between a teeter totter and a seesaw?

The simple answer is that teeter totters often have seats for more than two children. However, the terms are often used interchangeably depending on where you live!

Arguably, the most common of the two terms is seesaw.

However, depending on where you go, you’ll see different terms being used – and even more than just teeter totter and seesaw!

In New England, U.S., you’ll come across the biggest variety of terms for this outdoor toy. In the southeast of the region, you might hear ‘tilting board’ or ‘tilt’.

In northeast Massachusetts, however, you could hear ‘teedle board’. The term changes to ‘dandle board’ or ‘dandle’ as you go to Narragansett Bay.

This term is also used across the northern inland states all the way to the West Coast.

In other English-speaking countries, like the United Kingdom, seesaw is the most common term.

The popularity of seesaws and teeter totters

Once ubiquitous in playgrounds around the world, there are fewer and fewer seesaws around.

In 2016 – Sharon Otterman wrote an article for the New York Times entitled The Downward Slide of the Seesaw.

These playground toys were introduced over 100 years ago and became a standard feature in almost all playgrounds in the U.S.

Nowadays, however, seesaws have been removed from lots of playgrounds due to people’s increasing worry about risk and harm – and the possible threats of litigation.

In her NYT story, Otterman noted how “Federal safety guidelines for playgrounds […] began to limit their use. […] Playgrounds that retained old seesaws were exposed to lawsuits.”

This is a shame as when used properly, seesaws are a lot of fun!

Why seesaws and teeter totters are great fun

There are so many reasons why kids love seesaws and teeter totters.

Their designs can vary but whatever the design (and however many seats there are) they all work in the same way: using torque.

Torque is a force that causes rotation.

If you’ve ever played around with a seesaw, you’ll have noticed that it’s easier to get the other side to move the further you are away from the center.

Seesaws and teeter totters work with this concept to create fun with two (or more) kids using it.

When one child sits on one end and pushes their feet off the ground, the other end moves in an equal and opposite direction – as per the rule of physics.

And so, children enjoy being able to influence one another’s movements up and down.

Teeter totter Vs seesaw – the difference

As we have just talked about seesaws and teeter totters and how the terms are often used interchangeably, we’ll now discuss why some people differentiate between the two.

Both of these backyard toys use the same concept of torque for fun, but their original designs were slightly different.

As its name suggests, a teeter totter was designed to ‘teeter’ all over.

Though the same up and down movement is achieved, the original teeter totter design also allowed for side-to-side movement too as the centerpiece was a round attachment that allowed for a circular motion.

Teeter totters were usually designed to be a lot smaller than some of the big seesaws you’d see in playgrounds, which made them a great toddler activity.

What’s more, teeter totters often had more than one seat per branch.

Originally, seesaws were much more of a basic design than a teeter totter.

Their name derived from the up and down sawing motion over the center.

There is no side-to-side movement and they’re essentially simpler.

With a seesaw, the person who is off the ground can be several feet high.

This is why many playgrounds have gotten rid of this piece of equipment as they’re afraid of repercussions and lawsuits.

Teeter totter Vs seesaw – which is better?

If you’re choosing a piece of play equipment for your backyard, it really depends on the age of your kids. 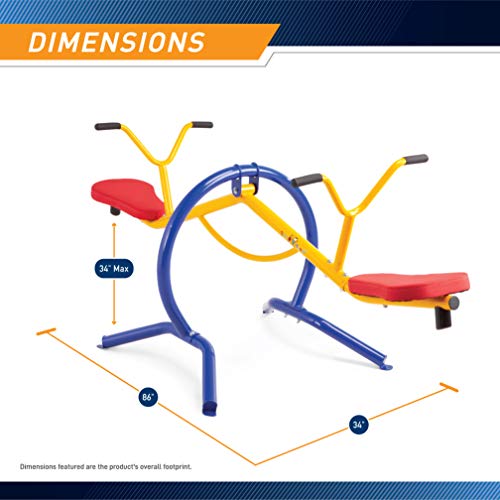 For younger toddlers, a teeter totter is probably better, but for older kids a larger seesaw will provide more entertainment.

Depending on the size and weight limitations, you might even be able to have a go too!

The Benefits of Teeter Totters and Seesaws

These outdoor toys are great for teaching children to work collaboratively while having fun.

They’re also good to get them to understand about forces like gravity.

Making a seesaw or teeter totter as safe as possible

If you do purchase a seesaw or teeter totter, you’ll likely need to establish some ground rules with your children and supervise their use of it.

Any outside toy can be dangerous, but a seesaw or teeter totter is probably only going to be dangerous if it’s not used as it’s designed to be used. 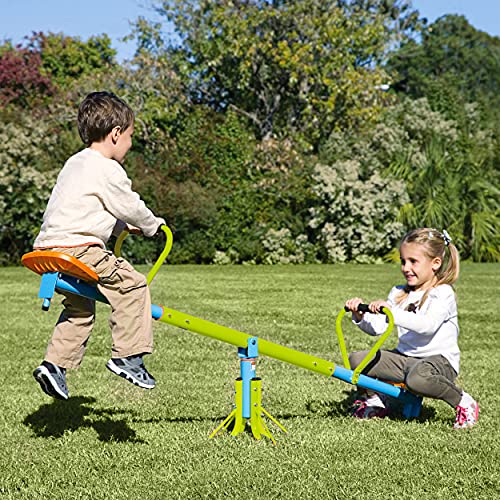 For example, if someone is standing on the seat of a seesaw then jumps off quickly so the other person falls with a thud.

Ensure your children follow these rules when on their seesaw:

You should consider the flooring underneath the seesaw or teeter totter.

It’s better to place it on a law, for example, rather than a hard floor like a patio that could result it scuffed knees and elbows and bumps to the head. 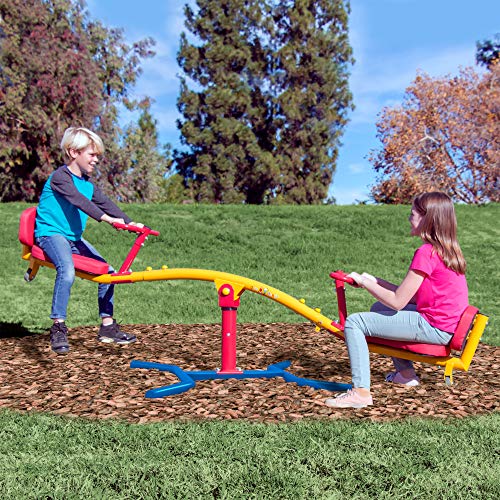 Originally, they were different in their concepts but nowadays, they can both mean the same thing. If we go back to their original designs, a seesaw was an up-and-down garden toy that would have two seats.

Conversely, a teeter totter might have more than two seats and would also move in a side-to-side direction as well as up and down.

Both garden toys are lots of fun, but safety precautions are needed.

You might see fewer of these in public playgrounds due to overly worried districts being cautious of lawsuits, but with supervision and correct use, they still remain a great toy for outdoor fun and learning.